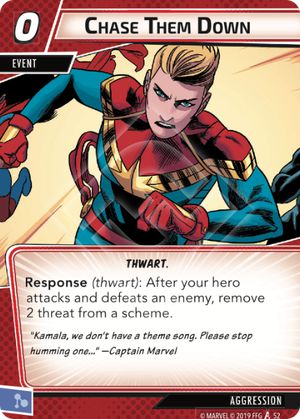 Q: Can you trigger Chase Them Down after defeating a villain stage?

A: Yes, defeating a villain stage is defeating an enemy. -(Developer Ruling , Hall of Heroes)

Chase them down is arguably one of the first staple cards in M:CH, especially for certain Aggression builds. On the whole, Aggression lacks threat removal, and so having this option on hand is huge. Let's break it down:

-- The only cost is the card itself. 0 cost for 2 threat is very good by the standards of any class, even Justice.

-- Adds much needed threat removal to the Aggression aspect.

-- Requires a hero to attack and destroy a minion. In the core set, this makes this card not very playable for Iron Man or Spiderman, who both tend to do other things (Thwart and Defend, respectively).

-- Highly situational, and can end up as a dead card in the wrong situation or villain/scenario.

-- She-Hulk: She-Hulk has two huge advantages when it comes to this card. For one, she is almost always attacking, and the other is that she is in Hero form nearly every turn.

-- Iron Man: Iron Man wants to thwart whil in hero form. His one attack doesn't lend itself well to attacking, and he's got his gauntlets and events for that. Plus, he's gonna be in alter-ego for a lot of the game, making this a dead card.

Cactusguy · 337
You can also use this when you defeat the first stage of a villain. — Archimboldi · 1 11/9/19
Very true! — Cactusguy · 337 11/13/19
You can play this card after killing a minion with the gauntlets (which are an attack), so I think they are still pretty useful w/Iron Man. — cferejohn · 1 11/14/19
This is great with ms. marvel as its a thwart event, so she can amplify its effects with shrink and potentially take the event back with her hero ability. Embiggenned big hands followed by shrinked chase them down is a very powerful turn once your rig is set up and only costs like 3 cards net — WillPovey · 2 1/10/20
@cferejohn: You couldn't use this with Gauntlets; it's only "(a)fter your hero attacks". In this case, your "hero" means your Hero/Identity Card actually exhausting to perform an Attack. — JQTNguyen · 14 1/21/20
As an amendment, a recent ruling (which may have contradicted a previous ruling) makes my previous statement was incorrect and this applies to any Attack made by a Hero. — JQTNguyen · 14 2/2/20