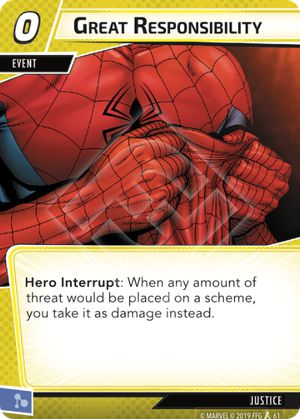 I'll provide my opinion of the card in solo play first, and then in multiplayer.

This is a terrible solo player card. It can only be used in your hero form as a hero interrupt. But the villain will be not be placing threat on the scheme when you are in your hero form. He will be attacking you instead. They will only be scheming in your alter-ego form. But you can't play this card at that moment. You can take a damage to keep a single threat off of the agenda in hero form when playing this single player during the first step of the sequence. There is a chance that the villain will scheme off of the card you draw each round, but that is a very unlikely situation and you won't keep this card in hand anticipating it, so that's not really a helpful argument.

In comparison to Emergency, you also have a 0 resource event that can be played in one of your two forms. Except you do not have to take a damage to prevent the threat from accumulating.

I wouldn't include both of the cards mentioned and in solo play the Emergency would come out on top for me as an option.

Multiplayer is a different scenario. This is where Great Responsibility starts to take over as a better option. Emergency doesn't scale, but the opportunity for Great Responsibility increases with the number of players in the game. This card gets better with multiple people because when you are in hero form, but they are in alter-ego form you can stop a good chunk of threat being placed on a scheme. I think this is a good option for 3-4 players and it is better on characters that can really take the hits (or even want to : She-Hulk)

You might even be able to take it as damage and survive on a big spike, but if you have to take one for the team, it might be worth it based on the other options and the end of the scenario when things are getting tight. You can't take a portion of it, so if 5 threat are put on that could sting if you wanted to prevent it. If you need to take the hit then rest next turn that is also an option if it keeps the game going.

Solo - Not good, and even with the limited group of cards you would be better off not taking it.

Multiplayer - A solid option to prevent some serious threat that could be placed while an ally is taking their villain phase in their alter-ego form.

Note: If this also could empty a scheme that was just placed on the board that turn, that would tilt me a little bit towards it being better in solo, but I don't believe that the rules would agree with that thought pattern. But if you draw a scheme off the deck and you could take 2-3 damage to immediately remove that scheme so it really never hits the board, that could be worth including for single player.

Bronze · 186
Definitely agree! Playing solo, I avoid it, in multiplayer is useful. — Axios · 5 8/10/21
Threat is placed on the main scheme during the start of each villain phase, regardless of whether your identity is alter-ego or hero. — jmmeye3@gmail.com · 11 11/11/21
right, but in solo that's still often 1 threat. better to run Emergency at that point. — Blackhaven · 1 12/5/21
Ultron really brings home the point that sometimes you want threat prevention alongside your threat removal, and this is one of the cards that do that, together with stuff like Concussive Blow, Counterintelligence, and Under Surveillance (in a way). As a side note, cards such as Shield Block and Wiggle Room can negate the damage from this, regardless of their (Defense) label. — Blackhaven · 1 7/19/22
2

Can you instantly defeat a side scheme that comes into play with this card by taking the amount of threat it comes in with as damage, or is this only for like slowing down the main scheme typically?

For instance, does this combo with One Way or Another?

How does this work with a card like Breakin' & Takin', where it comes in with threat as the When Revealed effect? Would it prevent the revealed only, all of the threat, or none of it?

Tromdial · 15
For your first question - In the Official FAQ, it says "Side schemes enter play with threat already on them, meaning threat is not 'placed' at this point". Thus, it would not work with One Way or Another. I'm honestly not sure about how it works with Breakin' & Takin' — Stretch22 · 191 10/13/21
For breakin' and takin', I believe there are two answers: 1, when you setup the game (playing Rhino expert, thus, resolving setup with Rhino II in play), there's no way you can prevent the extra threath per player because this step comes in before you even draw your cards. IF, however, breakin' and takin' comes in at another point in the game, as it states "PLACE 1 additional threath per player", then I believe Great Responsability applies. — neothechosen · 5513 10/14/21
1

This card is stupid good in any deck that has damage mitigation. Scarlet Witch in particular can prevent huge amounts of threat with this and then sack a protective shield to prevent 3 damage. Stupid good.