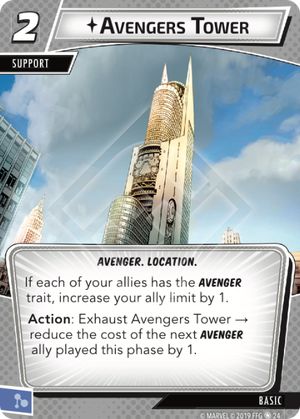 Q: If I have 3 Avenger allys out with Avengers Tower in play, what will happen if I play Maria Hill as my 4th ally?

A: The ability on Avenger’s Tower doesn’t come into play in this scenario because Maria Hill does not have the Avenger trait. Instead, the regular limit of 3 is what’s at play. The rules for playing an ally when you already control your max is that you must immediately discard one you control. This happens simultaneously to the new ally entering play, so that the number of allies you control never changes. So, to resolve the situation you described, you would play Maria Hill and discard one of your other allies at the same time. After Maria enters play, then you can resolve her Response effect. -(Developer Ruling, Hall of Heroes)

No review yet for this card.