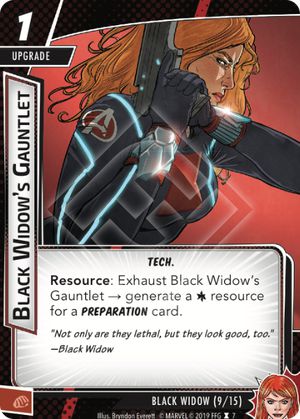 Okay, if you look at Black Widow and the cards she shipped with, at the time it seemed like she was the precursor to some new development in Champions. All the preparation cards, the Spy designation, Agent Coulson being so expensive and so specific...we definitely thought (particularly with Spider-Woman coming out three months later) that there were going to be some awesome Spy builds in our future.

So here we are, 2 years after Widow's release...still waiting for redemption.

This is dramatically more painful for Widow players because she has two copies of this card, and they affect exactly nine cards that aren't specifically in Widow's deck. And of those nine: 1 is Leadership, 2 are protection, 2 are Aggression, 2 are Justice and 2 are Basic.

So this card sort of forces you to include specific cards in order to maximize it's efficiency.

Look, I've built decks that hinge on a combination of three cards, so I don't consider this card a failure. My problem is that since it is a hero specific card, it invariably influences any deck design with Widow. The same is true of Ms Marvel and several other heroes. But Widow just has fewer overall options, because literally only two preparation cards have been released outside of Widow's actual expansion.

A protection in Valkyrie and an Aggression in Wasp.

At the end of the day, Widow has enough Preparation cards in her hero deck to make the gauntlets meaningful, but their limited use in the larger card pool just serves to draw attention to the fact that FFG gave up on Spy heroes almost immediately after giving us one.

MacGhille · 173
You're not forced to build a deck around Preparations because of these gauntlets. You're forced to include preparations in a Black Widow deck because it triggers her identity abilities. They're two cheap upgrades that you can put down, thin your deck, and pay for preparation cards that you'll be playing anyway. Other than melodramatic whining about the lack of recent preperation cards released, what's not to love? — erikw1984 · 3 7/21/22
Definitely a misleading first line of text. Hero card resource generators are almost always incredible and this is no exception. Play them as quick as you get them, and Safe House 29 makes sure they will never go to waste — Stretch22 · 242 7/21/22
Yeah, this is not a great review. Just move along. — Judicator82 · 80 7/22/22
The comment sections of these reviews is getting very toxic and unhelpful. Who do you guys think you are to put down others' work and opinions? Stop getting high on your own manufactured epeen. As to the review, I agree that it is disappointing that Widow is not getting the same level of post-release support as Iron Man. — The_Wall · 112 7/28/22
Criticism of a review is not "toxic". I don't think MacGhille is a bad person and I don't think comments are casting aspersion on their character. Except maybe the whining part...I don't think the review is "whining" so much as a complete failure to judge value of a Signature card. — Judicator82 · 80 7/28/22
2

Widow's Gauntlets are the glue that makes her Signature package sing. This low-cost Resource generator may only target a specific type of card, but the combination of the 8 Preparation cards included in her kit plus her Hero ability to ping for 1 damage each time she triggers one keeps this spicy. Add in some Aspect and Basic Preparations, and between 25% and 50% of your deck can be Preparations.

Comboed with her Safe House to keep drawing those Preparation cards over and over, Widow consistantly says "no" to the Villain over and over while chipping away at their hp.

Finally, these Gauntlets make some of the "meh" Preparation cards like Target Aquired and Espionage excellent, as they are played for "free" and also do a damage when triggered.

For Widow, this is an "S" tier card. Play it as soon as it comes up, it powers her entire engine.

Judicator82 · 80
While I agree with the content of your review, I do not like the way that you put down another user in order to get yourself over. — The_Wall · 112 7/28/22
I think the criticism was far on my part. Calling Black Widow's resource generators "awful" is not a fair valuation, and I wanted to write an alternative review that provides (from my own experience and the perceived anecdotal evidence of other players over the last couple of years) the outlook that most players actually share. — Judicator82 · 80 7/28/22