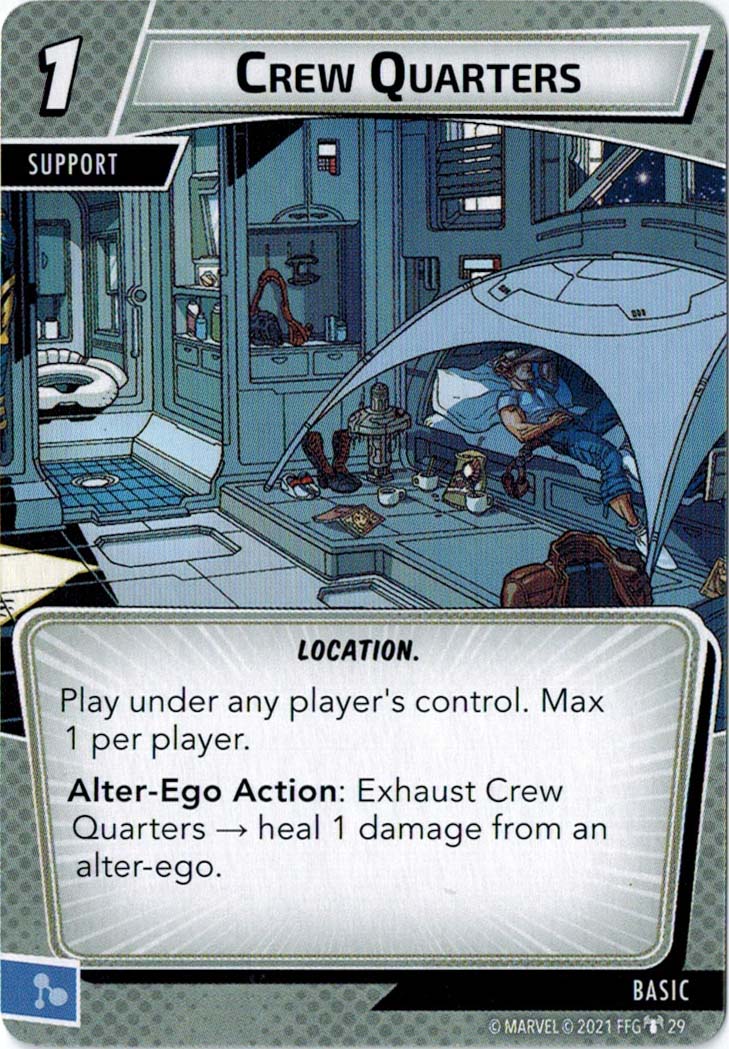 Solid card. It's a permanent card that can heal you for two over two turns: once when you flip to Alter Ego and then again at the start of your turn. That's quite good for 1 cost and thin your deck for maximum efficiency. Complements Venom quite well once his health gets really high where it's better to use Project Rebirth 2.0 to draw a card instead, yet this helps him recover for 4 with Project Rebirth when he's low combing into an Aunt May for Venom.

DoxaLogos · 152
This seems too slow to me. Early game, you'd rather play a resource generator or card drawer. Later in the game, you just don't get that many activations. Maybe will have a niche in a "healing" archetype down the road. Doesn't pass Endurance or Down Time for me atm. — Stretch22 · 189 7/21/21
Comparing it to Down Time really depends on how strong your Hero side basic actions are relative to your recovery. If they're much better, you'd rather be saving your exhausts for them (such as Venom or Hulk), and Crew Quarters can still heal you for 2 when you switch to Alter Ego (1 each turn) - especially for characters such as Black Panther and Ms. Marvel who are probably switching for the economy rather than the healing. Even if you Recover once during your flip, it breaks even. Plus there's occasional value to healing another Alter Ego. If you're planning on Recovering twice during your flip (perhaps for a face-tank She-Hulk), then Downtime blows it out of the water. If you never go AE, then Endurance beats them both. — Death by Chocolate · 2 7/25/21