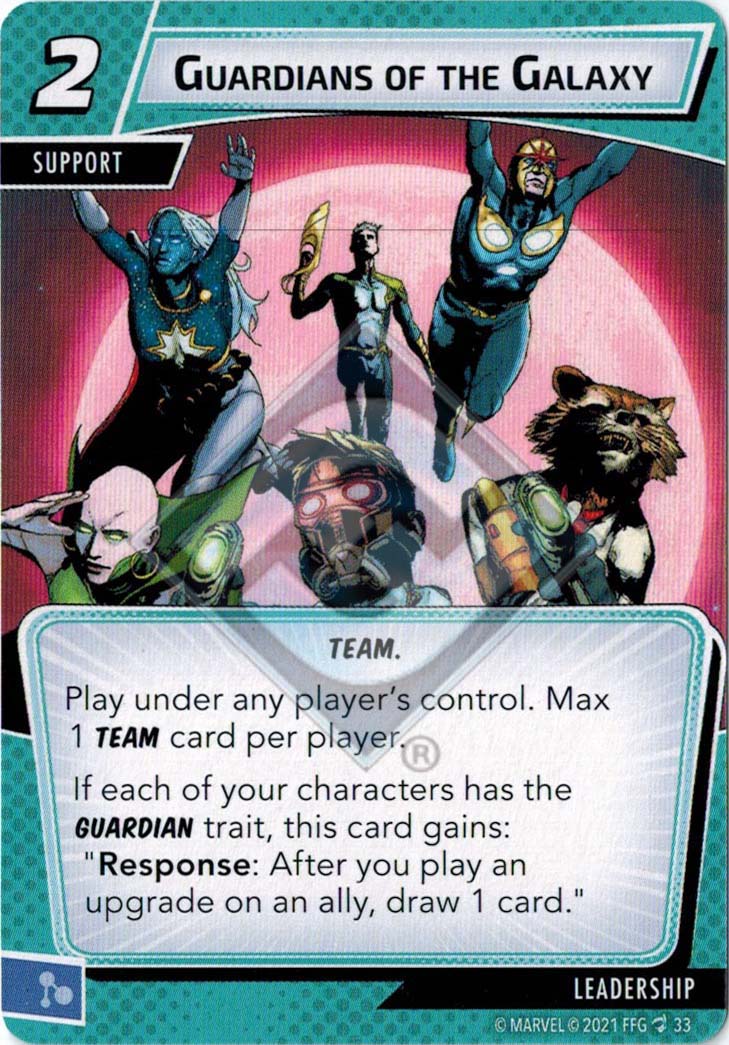 This card is for one specific archetype: a Leadership deck, fronted by a Guardian, with many Guardian allies (or any allies, for Peter Quill), and also full of upgrades to put on those allies. In that deck, this will draw you a bajillion cards. Otherwise, it does pretty much nothing.

Frustratingly, most (all?) of the Guardian heroes are only guardians on their hero side, meaning this will turn off while you're in alterego form. You can usually play around that, but if you wanted to try sitting in alterego for an extended period, you're not going to be drawing extra cards. Boo.

Fry · 140
so just play a copy of Honorary Guardians on yourself so you are always a guardian even in AE. This card also works for a Leadership deck running little to no allies and tons of upgrades in multiplayer - it doesn't say they have to be played on YOUR allies! — Death by Chocolate · 4 12/25/21
Playing Honorary Guardian on yourself is certainly an option, but doing that removes it from your deck, so you have one fewer copy to play for free on an ally (which will presumably be huge and/or have other upgrades) for +1 HP. — Fry · 140 1/9/22
What other benefits could be had by making Peter Quill a guardian with Honorary Guardians. I'm not seeing any other cards except this one that might benefit from that move. — themantheycallcris · 1 5/12/22
0

In german, there is a failure in the translation: There it is called "Response: After you play an upgrade OR (That is the failure) an ally, draw 1 card"

That is a tremendous difference, there you can drop card after card when playing leadership with triscallion and knowhere and updates for allies like yondu. The thinking is, that you push the allies as strong attacker without getting Response-damage.