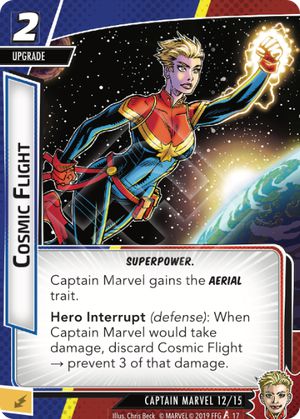 The proper use of this card can be unintuitive. Even though one of its abilities is to prevent three points of damage, when you receive three points of damage you do not spend this card unless you have to spend it to survive. You want to keep this card in play in order to use the Aerial ability; your goal, ideally, is to never spend the card. That might seem like it means that the ability to prevent damage then becomes useless, but that isn't the case. It basically means the card serves the same general purpose as gaining +3 hit points. Note that the only purpose of gaining +3 hit points is to prevent you from being killed, if you don't take so much damage that you would have been killed had you not had the extra hit points, those extra hit points technically never got used. However, it is so important for your character to survive that extra hit points are still valuable. Similarly, having a Cosmic Flight which just sits around waiting to prevent a hit from killing you is valuable and worthwhile.

Usually, the only thing that Aerial does for you is to turn your worthless Crisis Interdiction cards into useful cards. This isn't a huge benefit, but you do have three of them, and they are your only thwarting cards. It also gives a boost to your helmet, but this won't matter unless you are playing a special deck based around playing the helmet and defending, in which case it is pretty obvious you are playing Cosmic Flight as part of your combo.

Although the protection ability is useful, I generally think it isn't that amazing for the cost, especially since Captain Marvel isn't a hero who is especially short on hit points. And the ability to go Aerial also isn't that amazing. But together they make the card well worth playing. I wouldn't say it was a top priority must-play card, but I always make an extra effort to play the card because, not only is it effective, it is much more fun being able to use Crisis Interdiction at a critical point instead of having it be a dead card in your deck, and it is comforting having the protection from being killed if you make a miscalculation and take more damage than you can handle.

Once you have one copy in play, the second copy can be played and spent any time you like, exactly like a copy of Defensive Stance. I usually don't bother, though, unless I have spare resources, since between her high recovery, self-healing ability, and already having one copy in play, doing this usually seems like overkill.

cnalexander · 104
I've been going through a Captain Marvel phase lately, and I totally agree with you. This card should not be overlooked, if only because it makes Crisis interdiction a good card. I happen to like that it boosts your helmet, Captain Marvel can become a good blocker and she relies on Energy Channel / Photonic Blast more than her basic ATK anyway. — neothechosen · 7026 11/24/20
You both make very valid points however I feel, personally, that Cosmic Flight has become more cost effective and useful since A: the arrival of Deft Focus which reduces the cost of a superpower (which this is) by one; and B: Dive Bomb (which even has Carol as the art work). It can only be used when Aerial and does 7 damage to an enemy and 1 damage to every other enemy. This can be incredibly powerful against villains with multiple low cost minions like Ultron. The Dive Bomb is expensive at 4 points but then that's not as big a problem for Cap with her Energy Absorption 3 point resources cards.. This added heavy hit along with Photonic Blast (which can also take advantage of Deft Focus as they also are Superpowers, and Energy Channel to furth cement Captain Marvel as one of the best heavy hitters in the game while also being a very useful thwarter even when playing an Aggression deck. — CBRAvengerIronMan · 1 3/17/22
5

I really do not like this card. If you don’t build your deck to accommodate it, it essentially results in 6 blank cards (Crisis Interdiction; Captain Marvel's Helmet; Cosmic Flight). But let’s try to review the card objectively.

All said, I still don’t like that unless you go for a very specific build, 6 of Captain Marvel’s cards (Crisis Interdiction; Captain Marvel's Helmet; Cosmic Flight) are essentially blank resources.

If you found this review helpful, like so that I can write more reviews :)

Francois · 175
Crisis Interdiction is good enough for emergencies even without Aerial. And both it and Cosmic Flight have energy resources, so they're easily rechanneled. — OrionJA · 7 8/25/20