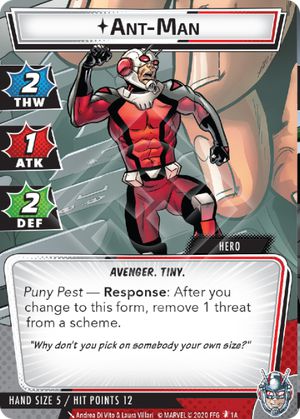 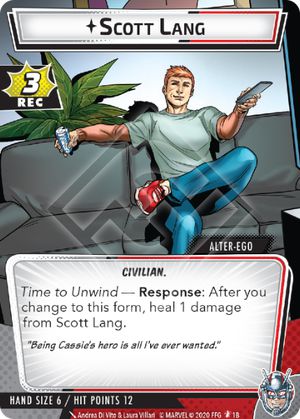 I finally got to play Ant Man and WOW!! He's got to be one of the coolest and most powerful heroes there is, probably one of the most complete heroes, with so many possibilities he's clearly a top choice for solo.

DAMAGE: Among the strongest in GIANT form, with 3 ATK, but also 1 auto-DMG when you turn into giant mode (so no more tough status for you, villain!), and maybe some extra damage from Giant Strength. To put it simply, HE'S DOING BETTER THAN THE HULK! Even in TINY mode, if you put all Army of Ants into play, you're a 4DMG hero.

And not to forget: Giant Stomp. Unless the villain is guarded by a minion, you can play that card THEN attack... meaning you'll be dealing almost as much damage as Hulk Smash, and getting rid of Ultron Drones.

HEALING: Nice healing, in between Ant-Man's Helmet, Scott Lang's time to unwind, and Pym Particles, shifting between alter-ego and hero modes will have you heal a lot of damage.

RESOURCES: Not his strongest attribute, ANT MAN doesn't have resource-producing cards like Cap or Thor, and doesn't have crazy double/triple resources like Black Panther or Captain Marvel / HUlk. Still, Ant-Man's Helmet and Pym Particles can get you a relatively stable way to draw cards, not something every hero can claim.

EFFECTS: with Wrist Gauntlets, ANT MAN can become a very serious stun / confused card-dealing hero. It's quite possible to build you deck around the resources needed for this, you could potentially end up stunning the villain every turn, which s always a strong move in solo.

THWART: Last, dealing with threaths and schemes. A few recent popular decks have successfully combined ANT MAN with the Justice aspect, because THW isn't his best ability. While that line of thinking is correct because he has few THW options (1 copy of Hive Mind which isn't all that great unless you have Army of Ants in play multiple times, Wasp ), it needs to be said that he still has a much easier time at THW then a lot of heroes. For example, playing expert, you often have to deal with side schemes right of the bat. Flip to tiny, remove 1 threath, THW for 2... job's done! Except CAP (and it costs him a card to activate "I can do this all day"), no other hero can do it better.

All in all, ANT MAN is a very strong hero and very fun to play. If you don't have him already, you should seriously consider it!