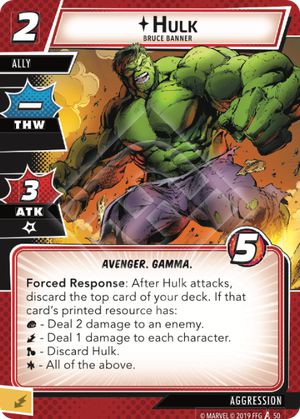 I think that Hulk can do some serious damage with the new Enraged buff. But you are likely that one of the 2 attacks shows a symbol in some decks if not the or . So you likely will only get 2 attacks out of him with it unless you get on both attacks on that combo. With this particular combo, he can on a perfect 3 turn attack get in 21 points of damage (3 base 2 for a and 2 for Enraged). That is just devastating.

It is more likely with enraged to get around 2 uses out of him for an average of 13 points of damage (3 base, 2 for a , 2 for Enrage, and again with only 1 for an ) while dishing out some abuse to other characters on the field.

What I don't like about it in this game however, is that you will never typically hold on to a card. So you wouldn't not play Hulk without the Enraged, and you wouldn't hold on to Enraged waiting for Hulk. He's a one of in the deck. And every card you find in the game is a resource. So, you will typically only see this happen in a game where you draw both in a single turn. Spending turns not doing stuff instead of playing cards isn't typically advised.

Even Hulk on his own can do a good amount of damage. The odds of what kind of damage that he will deal with depend on the build of your deck. However, at this point in the game it doesn't really make sense to build a deck of entirely resources just to avoid the downfalls of ever having to fall into the problem of losing Hulk. Nor is it typically possible since we have to take 15 cards of the hero that we are playing.

Despite what was mentioned above with crazy numbers, I think Hulk is really a solo play ally. When you start playing with friends on the table (especially at the 3 to 4 player count), his downfalls can cause some serious issues on the table.

Let's play an example out of 1 player at the table playing a Leadership aspect and another with a Justice aspect. If we attack with Hulk on the table what are the downsides? Well, the risks can be pretty devastating if we get an or a on any particular round. If for instance the leadership player has 2 allies out and another player has 1, you might have lost 4 damage that those allies could have dished out, or threat removal. You also might have removed someone's chump block that they would have used to keep them safe in a previous round and therefore kept more damage off the table. In these types of situations, Hulk does more "BAD" than "good". He can be outright just detrimental troll card for some players to be using.

He can still have his place in multiplayer games, but put him on the table and consider the consequences of attacking with him each round and maybe consider using that 5 damage as soak on a round in between to take a hit.

Although the Hulk’s attack has a lot of very legitimate disadvantages, the key thing to remember about him is that he is so inexpensive to play that he is arguably effective even if you never attacked with him ever. After all, minions with cost 2 usually only have 2 hit points and are mostly used to block attacks. With the Hulk’s hit point total of 5, he is tough enough to sometimes survive an attack by the villain. Or he can predictably block multiple attacks by minions before taking a big hit from the villain. A cheap cost 2 minion who can block 1-2 full villain attacks is decent minion, the ability to attack also is kind of an extra bonus. That said, he is much more fun to attack with, and if you want to attack with him you pretty much need a deck that is massively stacked with physical resources. Fortunately, that is a common subclass of aggression deck even without the Hulk, there are lots of cards that support a heavy “Fist” deck. So mostly I put the Hulk in that kind of deck, and he is great fun as a powerful but chaotic and risky attacker.