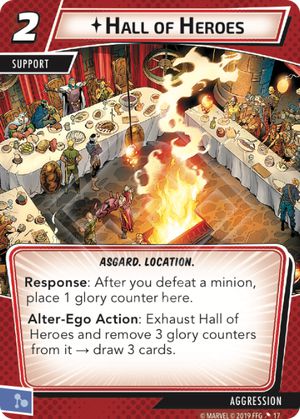 MyLtlePwny · 42
Why do say that after the RRG, this does not trigger response from allies and other supports ? From the post on FFG: "As a quick rule of thumb, the word “you” on upgrades, events, resources, and encounter cards refer to your identity, whereas the word “you” on allies and supports does not. Hopefully, this will help clear up all that grey area." So i understand that the You from this support cards is able to be triggered by everything, since here it does NOT refer to just my identity. — z3r0cul · 1 5/23/21
z3r0cul is correct. RR 1.4 , p 34 clears it up. — cbjuland · 8 11/23/21
I was revisiting this card for a deck idea and saw this thread. The original comment is correct. The Rules reference says " If a card ability triggers from a game function that “you” perform (such as “after you attack and defeat an enemy”), the player resolving that card ability must resolve that card ability as if the identity they control performed that game function, if able. (For example, if an ability triggers “after you attack and defeat a minion,” it triggers after the controlling player’s identity attacks and defeats a minion but not when an ally under that player’s control attacks and defeats a minion.)" Which is pretty much this situation. It then clarifies what extensions of an identity are. — Scotobot · 71 1/17/22
Scotobot and MyLtlePwny are correct. I had just put this into a new Valkyrie deck I was working on, trusting z3r0cul and cbjuland's interpretation of the RR, but then reading it over myself it seems they misunderstood the FAQ entry. Supports and Allies are not an extension of your identity, so those cards do not count as "you" and will not count for triggering cards like Hall of Heroes. — eapfel · 1 1/17/22
I stand corrected. Thanks for the explanation. — cbjuland · 8 1/19/22
Although, after rereading 1.4, last section: Cards that are not considered to be an extension of a player’s identity are: • Allies… • Supports — Attacks, thwarts, defenses, action abilities, and triggered abilities that resolve from supports in play under a player’s control are not considered to be performed by that player’s identity. —- So wouldn’t Hall of Heroes apply to your ally and your hero? — cbjuland · 8 1/19/22