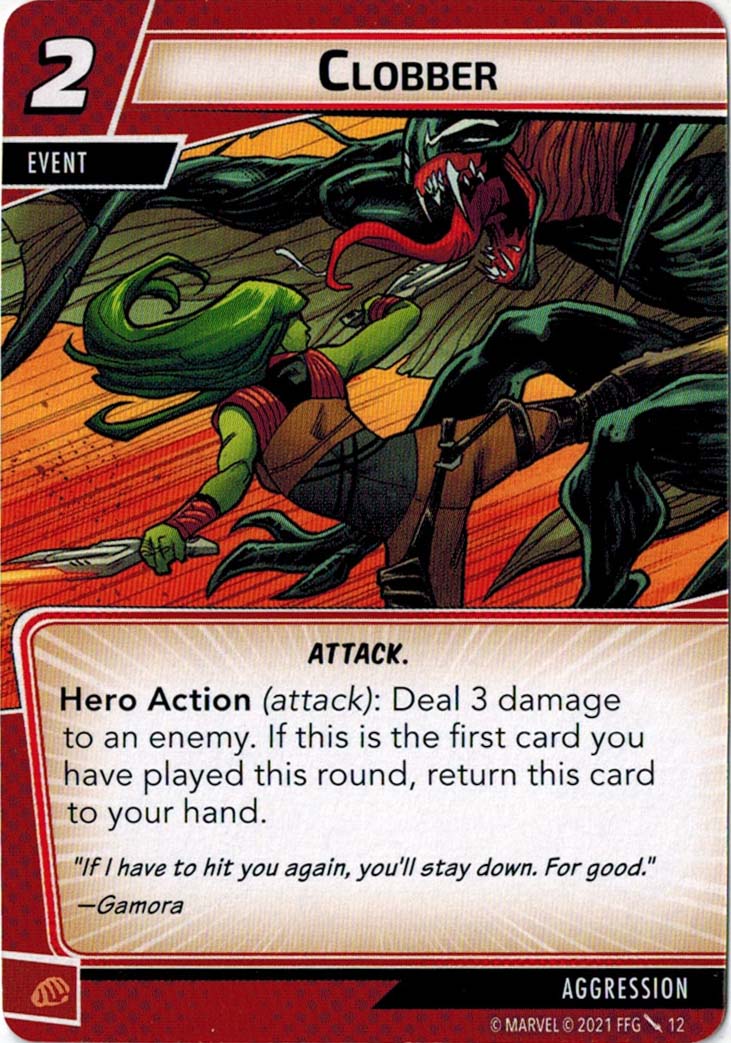 I realized it isn't released yet, but all "negative" reviews about this card were just negated by the upcoming release of the Wolverine hero pack. Specifically "Wolverine's Claws", make this card now ridiculously good. Playing it as your first attack event "resource-free", (by using Wolverine's health instead of the conventional resource cost), and then playing it again, now makes it far better. I see good utility in Wolvie's deck builds with this card!!!

bmay511 · 162
I see your point, but I wouldn't say it uniquely improves Clobber as opposed to other attacks. Like compare to the usually unplayable Uppercut - you exchange 'draw a card' (effectively) for '+2 damage', a pretty even trade. I'm not saying you're wrong, the review just reflects more on the insanity of Wolverine's Claws than Clobber in my opinion — Stretch22 · 228 10/19/22
I mean, Wolverine doesn't solve the problems of the card for other heroes, he only changes the card's value for himself. So, no I hardly think "all 'negative' reviews were negated." That said, I do think the card is an option for Wolverine to ensure he has something to use his claws on every turn. Of course this prevents you from drawing a card each turn for the privilege so it is not without its costs. — Erathis · 12 10/31/22
2

Since I did a review for Clobber's sister card, Impede, I felt I should do one for Clobber as well, especially since I've seen this card in a frankly worrying amount of decks posted/discussed. Clobber is a bad card. I just wanted to get that out there first because apparently it needed to be said.

Since the game first started, the idea that damage/thwart/ect... is worth a certain amount of resources has been discussed in great detail and a consensus of two damage for one resource being generally accepted (essentially Spider Man's Swinging Web Kick is the poster child for this). This might have actually been a rather high bar to set at the time when cards like Haymaker and Upper Cut were some of the only cards out there but now a days it's very easy to hold to this standard or even surpass it with a card like Mean Swing.

All of that set up to say, Clobber fails this basic ratio test badly. At standard cost you're spending three resources for three damage. This is Haymaker levels of bad... Haymaker, wow. But wait, it comes back into your hand if it's the first card you play a turn! Doesn't that make up for it? And the answer is still no. Even at a "refunded" two resources for three damage the card is still too weak to see play on its own merits in a generic capacity.

Which leaves us with the last reason that this might see play: synergies. Clobber can be used and then held for next turn to be used again every turn for the rest of the game. Of course, at that point you're no longer getting your "refunded" cost and you're stopping yourself from drawing a new card each turn but technically this is potentially valuable. At the time of this review the only character that specifically cares about having an attack event to play every single turn is Gamora (and maybe Spider-Woman to a lesser extent, but it's much worse with her than Gamora).

Frankly, Gamora has far far too many better options of cards to put into her deck for her to ever want something as weak as this. Even if we add the value of her base ability and her sword to the effect of Clobber (plus one damage and thwart) the card only breaks even(!) on what it's expected value for cost should be (three resources for four damage and one thwart). Yes, even with a three cost upgrade and hero ability buffing it, it still only just breaks even...

I don't know what more to say. Frankly this review really shouldn't even need to be written. I'd have thought this would all go without saying and yet Clobber is still being put in decks (as a three of no less!) and still being mentioned when discussing top Aggression cards and that just boggles my mind.

Erathis · 12
I agree it is too weak on efficiency alone because you are basically trading efficiency for flexibility. It could be 2 resources for 3 damage OR 5 resources for 6 damage. Both below rate but sometimes you want the extra damage like to close out the villain. Other synergies I would point out are the pure red archetype (No Quarter), a Jarnbjorn deck, or Fluid Motion deck. — Stretch22 · 228 8/19/22
I know I'm going against long term consensus here, but I've never liked the idea of judging a card's value by dividing it's damage by cost. Context for a given hero/deck matters. Does paying for this card with by using two Super Solider Serums act the same as paying with two cards out of hand? Either way, you paid for the card with 2 resources, but the source of those resources makes it feel different. If I pay with resource generators, I can keep more cards in my hand and maybe have better options to play in that turn. You might have had a bad draw, and this might be your only option for an attack event this round. If using this a couple times at the beginning of the round knocks out a minion that has a nasty response effect, do you really care how effficent it is? Even if there's better options, it might make sense in a Hulk or a Drop Kick based deck that wants mostly physical resources. Judging cards on efficiency only goes so far. You're playing to win, not playing to have the most efficient deck possible. — erikw1984 · 3 8/19/22
It's not for every deck, but there are certainly decks that want a cheap Attack so they can then do other things. It's not just that Gamora wants an Attack to play, she wants to *also* play a Thwart. For a net cost of 2 resources, you can't always do better: Pitchback, One by One, Press the Advantage, and Surprise Attack all have various stipulations that can make them less effective for certain decks/situations. Clobber's condition (be the first card played) is much easier to meet. — Fry · 119 8/20/22
I think Fry nails it ^. There's not a clearly better option in the Aggression aspect for getting this effect. — Stretch22 · 228 10/19/22
I guess I'll just say that "There's not a clearly better option in the Aggression aspect for getting this effect." doesn't mean the effect is good or worth using. Damage already has a fairly limited amount of utility, ie. Damage in and of itself isn't terribly useful in most decks. Minions may or may not be worth spending some resources to remove and villains need to be defeated at some point (up until you actually defeat them however, resources spent damaging the villain don't actually accomplish anything of value much of the time) but most heroes already come with fairly substantial damage built into their decks. Spiderman, for example, already has Swinging Web Kick and can't take it out of his deck even if he wanted to (on top of his basic attack, which he is likely to use any time he isn't defending), so just how badly does he need even more damaging events? Especially ones that are taking any already resource inefficient effect (damage) and doing it even more inefficiently than it should? If you want damage there are better ways to do it. Cards like Combat Training, Hand Cannon, or Allies of all types are all better uses of your deck space and resources than Clobber is, in all but a very few cases (like Gamora or now Wolverine, though Wolverine does Mean Swing really really well...). — Erathis · 12 10/31/22