"We Have Cyclops At Home" - Adam's X-Men Medley 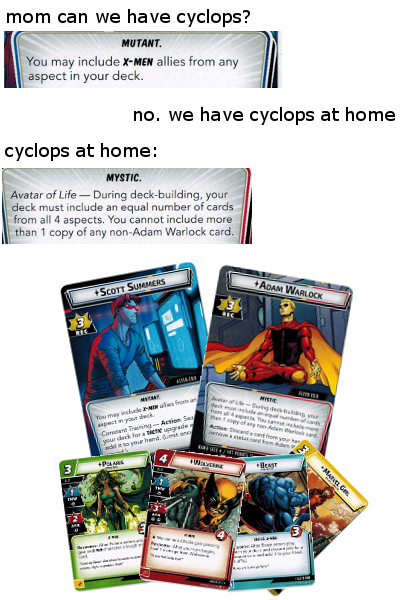 (Unlike the way the meme is usually used, Adam is actually pretty good!)

If you like this deck, feel free to give it a ❤ ! Thank you!

Cyclops can have any X-Men ally he likes. You know who else can do that? Adam freakin' Warlock.

And while it's hardly Tactical Brillance, Quantum Magic can also search for Game Time - and since Game Time is so good, it's still a very efficient play!

But Adam has his own advantages.

Adam is the only hero who can also have each of the Training upgrades in one deck. And since Danger Room can be used by a non-Mutant (if they're the one who plays it under their own control), now Adam can put any upgrade on any X-Men ally he likes!

Like Danger Room, X-Mansion can also be played and used by a non-Mutant. And Adam also comes with ally healing from his Battle Mage hero form ability. And has access to Med Team. Which is all a long way of saying he can keep his upgraded X-Men very healthy.

Adam Warlock can also run Boot Camp with all this for major damage!

Perhaps best of all, after playing 2x Mystic Senses and The Sorcerer Supreme, Adam can do all this while effectively having a hand size of 8! (You have to discard a card to trigger the card draw from Mystic Senses via Battle Mage, but you get roughly a card's worth of effect!)

Needless to say, the values of the X-Men with Training upgrades, Boot Camp, and healing gets crazy!

You are searching for these cards, and should almost certainly ditch all of your initial cards if none of the following are among them:

Good luck and have fun!