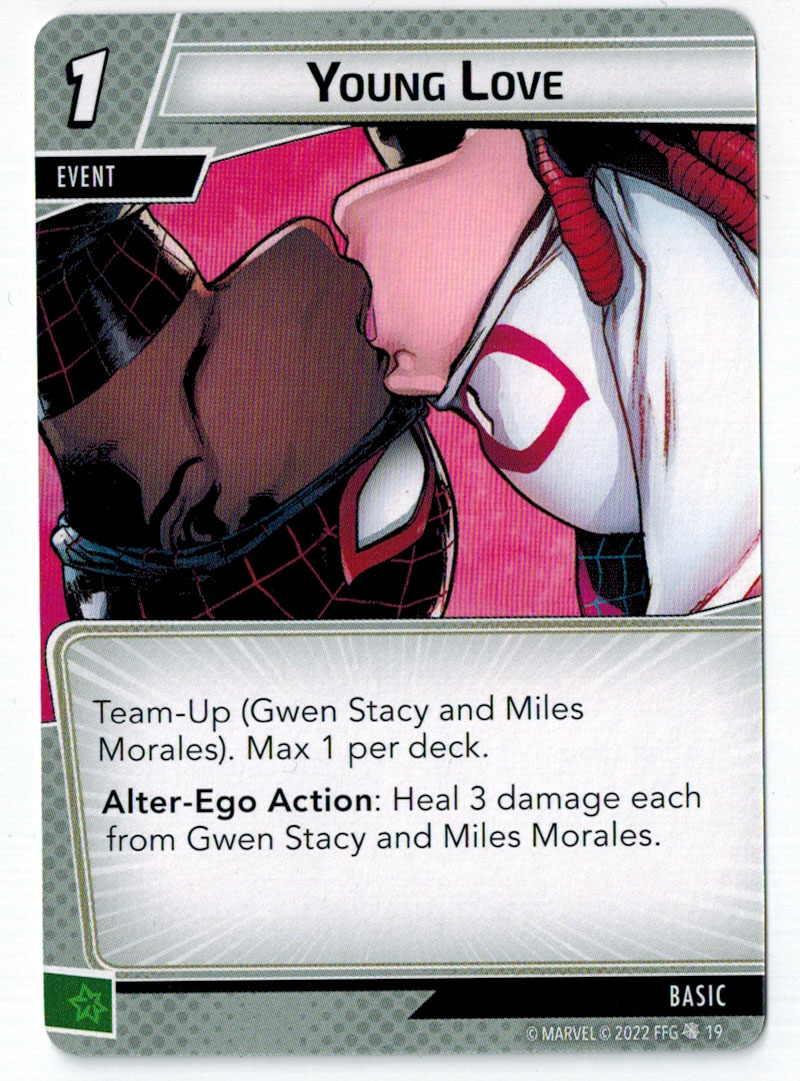 The problem with this card is that Gwen doesn't want to go home at all. She can stay in hero form for the entire game unless you have to search for Cpt Stacey or she is forced to go home somehow. I would run this on Miles, but not Gwen I think.

zebode · 1
It's tough to heal two identities with this, but it's not unreasonable to heal yourself and an Ally, since the allies will always be Miles Morales or Gwen Stacy. Getting an extra two thwart or four attack out of an ally while healing yourself for 3 is reasonable value. — Fry · 67 6/2/22
@Fry That's a great point. The card leaves a weird mouth feel because it is very hard to get FULL value out of the card, but even when used 'inefficiently', it does a lot for 2ER. — Death by Chocolate · 2 6/4/22 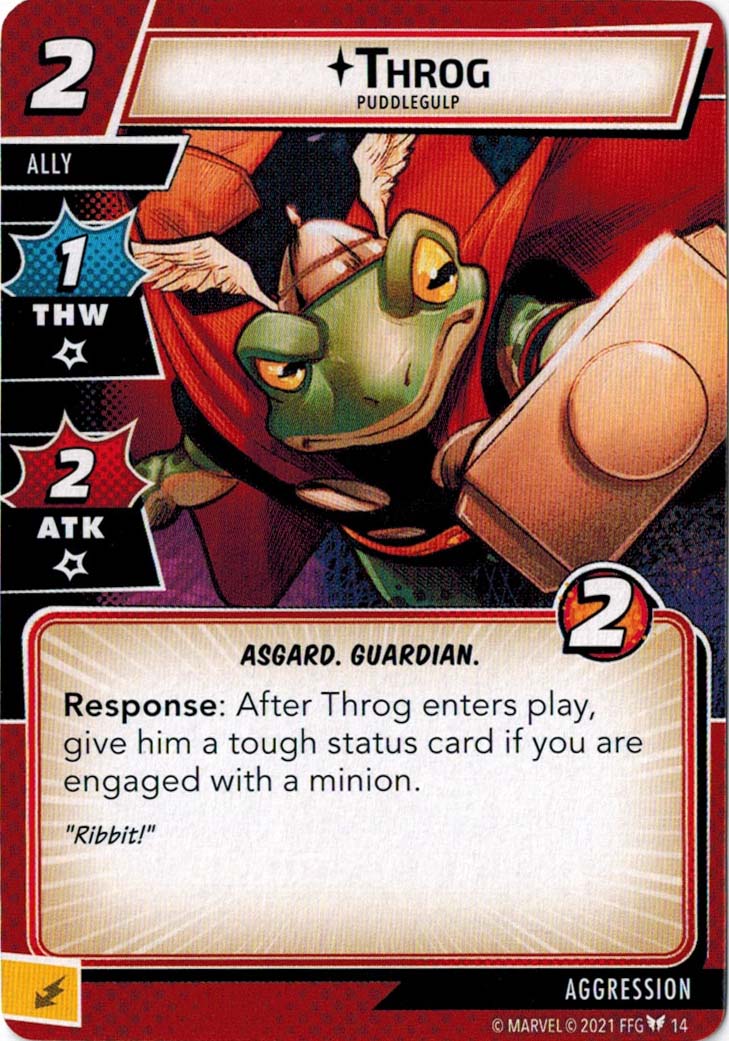 What's better than blocking with a two-cost ally? Blocking twice with the same two-cost ally! Throg can do it. Ideally you'd like to run Puddlegulp in a deck with The Bifrost to ensure you get that tough status card, but as with all two-cost allies, he's still quite good even when you can't get that benefit. 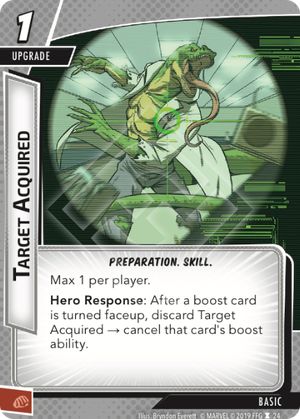 With the release of Standard 2 and Expert 2, I feel that this is a card that most decks should be considering as a 1x or even a 2x. Many of the new boost abilities lead to additional boost cards being drawn and things can spiral out of control. This is capable of stopping the problems before they start.

Ionichk · 6
A very scenario-dependent card, but agreed it is very powerful when needed. I recall some of the GMW mod sets having minions that come in to play off boost. This is a cheap way to beat a whole minion! — Stretch22 · 189 5/31/22
There are some scenarios where on Expert, I just pull all three out and say, "okay team, I don't care if it means running a 41 card deck, but everyone is going to do their part on the team and run a copy of this." — Death by Chocolate · 2 5/31/22
@death by chocolate Agreed! Even before Standard 2 / expert 2 some villains have nasty boosts... Klaw comes to mind with sometimes two nasty boost effects on a single attack! And not to mention GMW... — neothechosen · 4849 6/1/22
@neothechosen Yup! Sometimes you just can't afford to let Star Shark or Under Attack kill five allies! — Death by Chocolate · 2 6/1/22 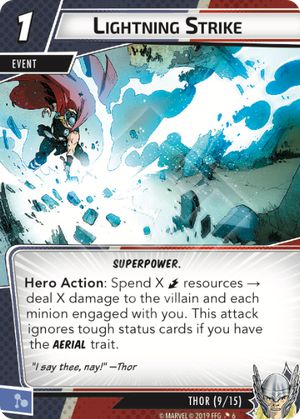 Lightning Strike might be the worst card in Thor's deck. It's horrifyingly inefficient if you aren't engaged with any minions (less than one damage per card/resource, ew), and not especially efficient with one engaged minion (if you can manage to pay 4, it's 8 damage for 5+card, which still isn't very good). It only starts becoming efficient if you can wrangle two or more minions: with two minions and 3, you get 9 damage for 4+card, which is respectable. But how often do you get two minions engaged with Thor? Probably not often, even with Defender of the Nine Realms, Get Over Here!, and Angela fetching more. Probably best in Aggression, where you can try to set up a The Bifrost -> Angela play on a turn when you happen to have another minion already. Or in Protection, where you could plausibly tank a small minion for a turn or two until you line up a Lightning Strike and an additional minion.

One upside is that this is not an attack, so you can still deploy it when you're Stunned or otherwise incapacitated. And some scenarios will throw extra minions at you more frequently, which will simplify the process of getting value out of Lightning Strike.

Fry · 67
As you say, its value really depends on the scenario you’re playing. I’ve recently played a few games with Thor vs Mutagen Formula (Standard 2, Expert 2, Goblin Gimmicks) and Lightning Strike was one of my most valuable cards. Managed to clear 8 minions with a Lightning Strike in one game. It’s becoming increasingly hard to evaluate cards in a vacuum. The value of a card is really dependent on the scenario, modular sets, difficulty level and whether you’re playing solo or multiplayer. — Ionichk · 6 5/29/22
How did you manage to acquire eight minions all on Thor at the same time? — Fry · 67 5/29/22 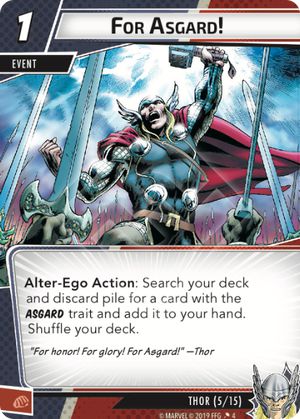 Thor can be pretty strong once he's set up, but with a base 5/4 hand size, it can take a while to even find your cards. For Asgard! transforms itself into another one of your key pieces for a mere one resource, helping you set up that little bit faster. Look to grab Asgard, God of Thunder, or The Bifrost, probably in that order.

It also recurs cards out of your discard pile, so if you lost one of those key cards to a Treachery, or you just want another go with Throg, it's good for that, too.